Today’s post is about the blues tracks on Thelonious Monk’s most famous album, Monk’s Dream. Though recorded on different days, they’re placed one after the other on the release, and actually sound almost like one piece that changes tempo mid-way. I want to investigate how these seemingly unambitious performances (built mostly from traditional vocabulary) form a powerful artistic statement.

One quote on this list of Monk’s advice to musicians, is “Don’t play those weird notes, play the melody!” And in “Five Spot Blues”, the first track I’ll look at, Monk does just this. His solo (which I’ll discuss more later) uses versions of this lick:

… around 15 times before going back to the theme, which is itself entirely built from 7 repetitions of the lick.

One really important thing about this lick, is that it is a finger pattern as much as a melody. The grace note or flam or crushed note (or whatever you want to name it) is a physical effect that’s kept in a player’s muscle memory. Effects like that are completely central to blues, but also bebop (e.g. Charlie Parker’s mordents). Vijay Iyer is the guy to read on this topic of “embodied” and “situated” knowledge: knowledge that only comes out when you touch your instrument.

Not only does Monk keep coming back to this lick in his improvisation, but even he even uses it to accompany the first solo, by tenor saxophonist Charlie Rouse.

Why does Monk re-use the phrase so much? Obviously we can’t be sure. But my reaction to these two tracks is that Monk has an aesthetic of slow, smooth transitions happening behind the surface level of swinging rhythms and phrases. I intentionally call it transition, not static repetition or elaboration. There is strong directionality in these performances. Both tracks purposefully develop in texture and interaction (as we’ll see in a second).

Why might Monk favour such slow evolutions of density and rhythm? I suspect it’s a way to maintain the focus of his band and keep everyone on the same vibe. For example, the whole first chorus (1:45-2:02) of his solo on “Five Spot Blues” explores the original finger pattern for ten bars until the drummer’s rhythms settle down.

Notice how Dunlop’s syncopated hits in the first few bars give way to an almost cartoonishly simple quarter note pulse on the snare starting on bar 6 (1:52)… and only by bar 11 are things focused enough for Monk to move away from the lick and play a different phrase (1:59). Dunlop seems to acknowledge the theme of releasing tension with the kick-and-hat-splash hit that ends his snare quarter notes, and also with the roll at the end of the chorus, a standard punctuating gesture often used to end a solo – so it’s as if the first chorus of Monk’s improvisation is actually still winding down the sax solo.

(I didn’t try transcribe this… another aspect of finger/muscle/physical patterns is that they put the spotlight on microtiming. The result is that Monk’s rhythms here are close to unnotateable. They come from physical sensations and from the possibility of stretching out the pattern in time by modulating the gesture that produces it.)

Track 4 on the album, “Bolivar Blues”, shows how Monk moulds these slow transitions around the 12-bar blues form. Each 12-bar chorus, or even pair of choruses, has a distinctive texture:

A little more subtly, not only is the 12-bar form used as a building block, but the point of rest in bar 12 is used as an area to cue or connect to the following chorus.

1:48 The sax plays a strong, bright swingy line, cueing the piano to take a back seat in the 3rd solo chorus

2:09 after a declamatory, preaching statement that resolved the blues form conclusively, there’s careful silence on beat 1 of bar 12 before Rouse takes up the mantle again with another bluesy shout

2:31 Rouse very clearly signals a switch to double time, and Dunlop plays some at the same time, which hints that this was a standard tactic for the band

2:53 Rouse plays a strong dark lick similar to his sign-off in “Five Spot Blues”, outlining a bII. Like at 2:09, this isn’t a cue but a confident inhabiting of the crucial bar 12

3:12 After a double time flurry, Rouse cues a switch of vibe with downhome riffing on the familiar blues scale

4:58 Not a cue, but you can hear Frankie Dunlop struggle a bit with the time after he has heroically resisted the pull of Monk’s quarter-note triplets for two choruses… he is switching back into normal comping mode (instead of resisting) and he slips a tiny bit

5:26 This connection emerges not in bar 12 but just before bar 5… Monk brings in a bass-register movement that will develop into a riff of its own at 5:41

The importance of the final bar is actually just one instance of the importance of “weak bars” in jazz and other African-American music. I think I mentioned recently, that, as an enormous generalisation, African phrasing tends to target the downbeat, while European phrasing begins on the downbeat. This is perhaps why even-numbered bars in a form often get used for call and answer, breaks and cues/communication.

(That’s from this cool site… http://www.kyushu-ns.ac.jp/~allan/Documents/Monk-Trans-F.html)

To finish, here’s Charlie Rouse’s whole solo on “Five Spot” with a sketch of the drum and piano parts. Try reading along to see their interaction! 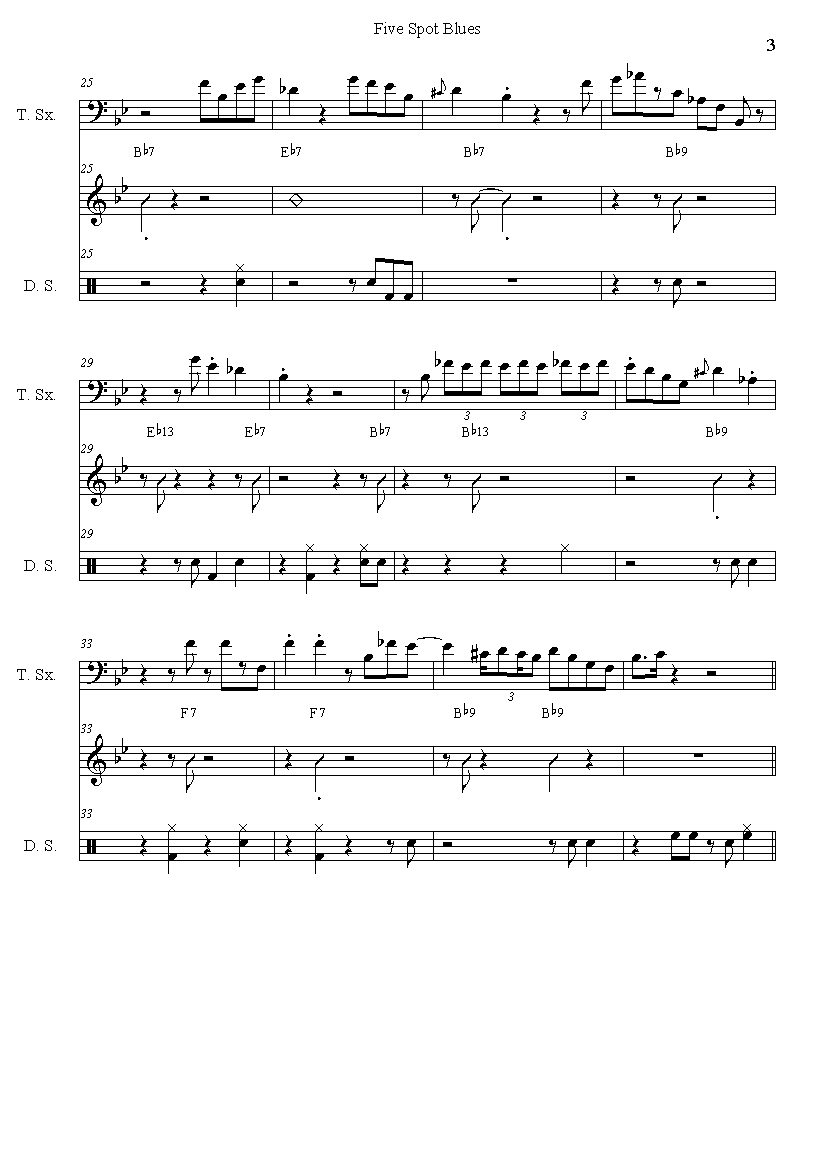