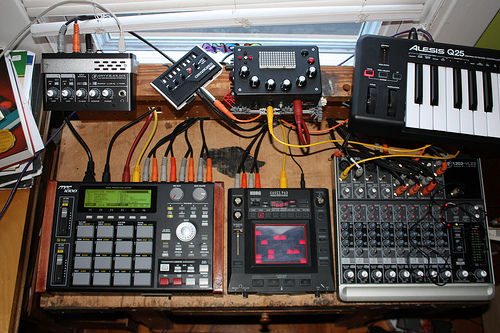 I made a drum machine beat every day of last month. Was it worth it?

Well, I noticed pretty quickly I had a style: edgy, syncopated 2- or 4-bar grooves, using both sparseness and intricacy, and obsessed with attractive combinations of sounds.

(This aesthetic owes a lot to Pearson Sound. If you want to hear 2 hours of great music in that vein, check this seriously good mix.)

My big discovery during the project was the importance of assembling good sounds. (Not necessarily good sound quality, by the way. My samples were mostly lo-fi, either taken from recordings or from a fairly crude freeware softsynth, Drumsynth 2.0.)

But I realised that browsing a library of samples can be a creative act. A lot of my beats happened when I found an inspiring sound.

When choosing sounds, I sought attractive timbres: sounds that seemed in themselves funky, rich, fat, complex, nasty or otherwise satisfying. One thing I noticed repeatedly was that those sounds tended to fit in multiple categories: a thrumming kick drum could be a bass note; a metallic or noisy percussion could sound melodic.

In particular I liked:

Bass hits (notice how the kick drum is tuned to the Ab, bVI of the minor chord stab, then another bass sound enters on the tonic note C)

Basically, for me, all of the above categories bleed into each other. As I’ve mentioned before, these sounds excite the ear’s ability to imagine the physical shape and materiality of a resounding object. That’s why we use physical metaphors so much: fat, big, rubbery, metallic, gummy etc.

Playing around with these, I started noticing properly the role for deep bass and high treble sounds in balancing out the sonic spectrum.

Other techniques I used were:

Hearing melodies in the drum pitches

Sparse use of one sound e.g. snare

A few days into the project, I happened to be in a pub that had background music. The drums seemed to spring out of the mix. My ear had become much more attuned percussion sounds and patterns.

There are two things I’d like to do with my newly-refined beats style. First, take some of the beats and put them in Reaper where I can apply FX and make complete songs. (But still using my drum machine to make the drumlines first – kind of like tracking the drums for a rock song before moving onto mixing.)

I’d also really like to compose for a band, but thinking as completely as possible in drum machine terms of combining sounds into rhythmic shapes. Instead of making a melody and chords, I would think of interlocking, cyclic rhythmic lines which could be bass notes, drum hits, chord stabs, vocal sounds, or combinations of those – with the choice made according to sonic balance and interest.

I may get to that in February. If so, I’ll try somehow keep the limiting simplicity of the drum machine. Having to convert files every time I wanted new samples was annoying – but it also pushed me to commit to a set of sounds, only bailing out if something really wasn’t working.

The once-a-day process was really fun. The whole point was that I could suit each day’s effort to how much time I had – a ten minute sketch or a couple of hours digging for samples.

The downside is that good ideas don’t get developed because you’ve moved onto the next thing; and also that you can get into too much of a routine and forget to be imaginative.

This month I’ll be working on learning and recording a single (pop or jazz) tune a day, but I won’t post them all online.

Anyway. My favourite beat is tied between Day 4 – British Exit (best crafted, I think) and Day 9 – Clouds In My Head (most imaginative).

Looks like I did my best work early in the month, doesn’t it? Next time I’ll look out for that and change something if I seem to be getting in a rut.

Last thing – how Soundcloud works. It seems to arrange for about one or two people to click on each piece you put up. After that, I think it’s the album art (and the genre you pick) that decides what gets views. Anyway it’s all single-digit stuff and much of that is spam from accounts offering “real plays” for money. The piece that got most plays was the one sampling my trio with Dyl Lynch and Max Zaska, which I posted about on Facebook. I think people clicked on it cause they were interested in that band.