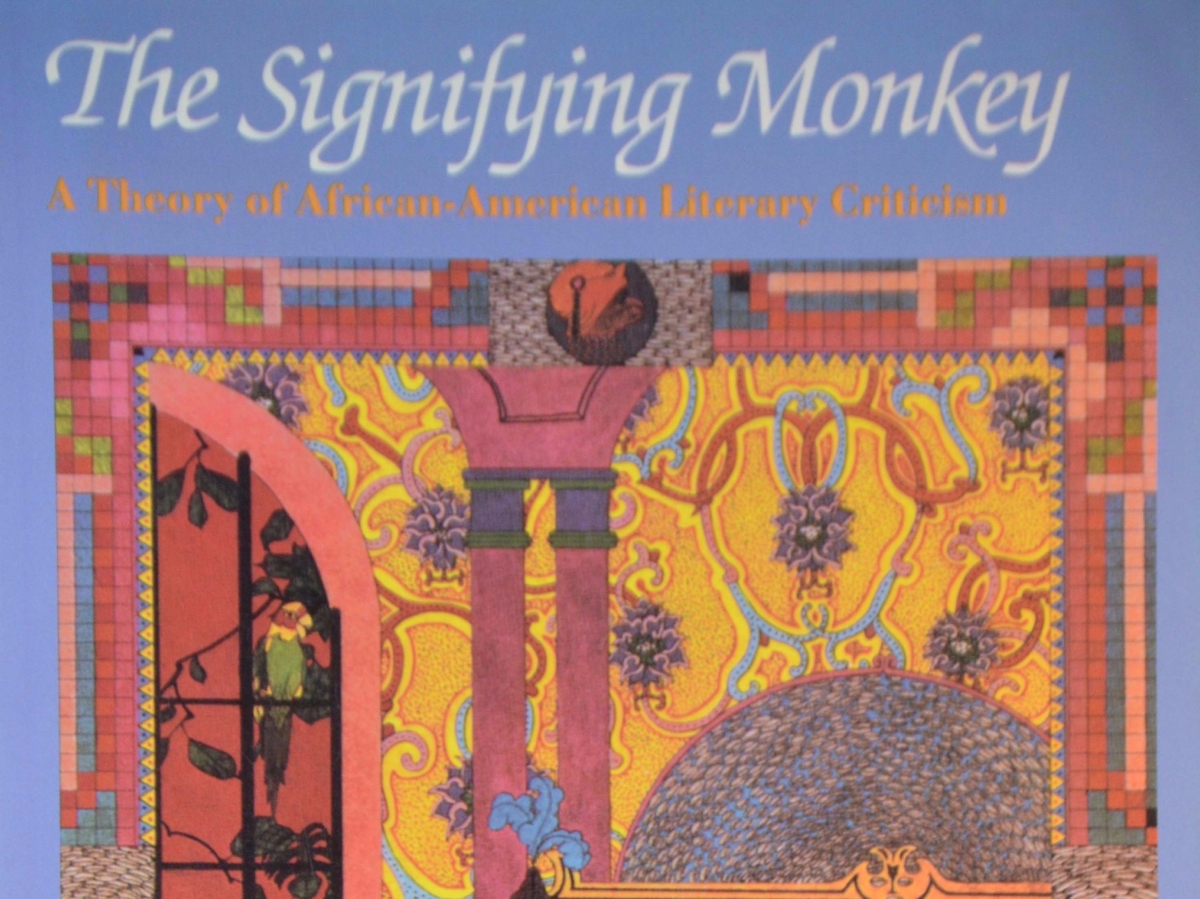 This Gang Starr classic, from 1998’s Moment Of Truth album, has a pun for a title.

If you heard the phrase before reading it, you might come away with one meaning: a reference to Robin Hood stealing from the rich to give to the poor, as laid out in the song’s chorus. “Squeeze the juice out of all the suckers with power/And pour some back out so as to water the flowers”. My blog post will look at the emergence of various further meanings from the title, to investigate if it demonstrates an African-American style of communication called Signifyin(g).

I think I first bumped into this term in Vijay Iyer’s writings. Signifyin(g) is about indirect, allusive ways of conveying meaning. Although it is “so shared in [African-American] culture as to long ago have become second nature to its users”, for non-acculturated people like me it’s hard to get a grasp on. After doing some reading about it to contribute to a paper on Ahmad Jamal I presented at the SMI/ICTM postgraduate conference this January, I noticed that “Robbin’ Hood Theory” might form a neat teachable example of Signifyin(g). All the quotes in this piece are from Ingrid Monson’s Saying Something (which is about Siginifyin(g) and similar processes in jazz music) and Henry Louis Gates Jr.’s The Signifyin(g) Monkey.

“Black people frequently ‘enounce’ their sense of difference by repetition with a signal difference.” (Claudia Mitchell-Kernan, quoted by Gates)

The repetition Mitchell-Kernan mentions is the reuse of (often pop culture) material; in the Gang Starr song title, it’s the reference to the legend of Robin Hood. Pastiche, allusion, intertextuality are other terms used for this re-appropriative aspect of Signifyin(g). 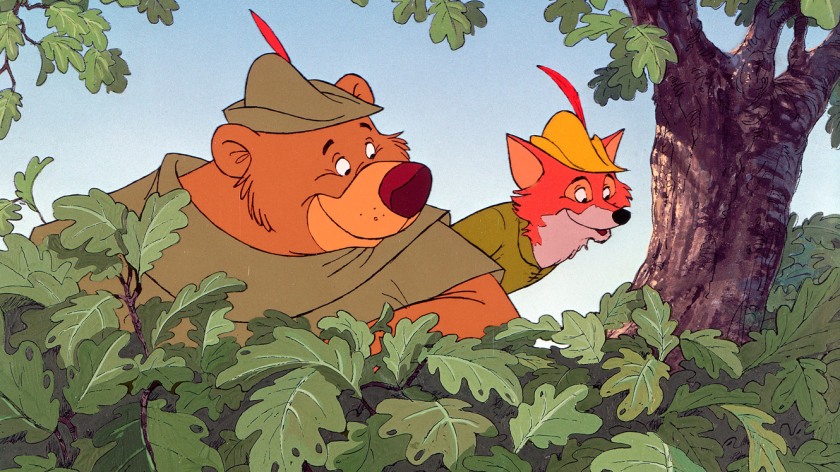 As well as this repetition or appropriation, Signifyin(g) involves a “signal difference” which often marks out “two discursive universes” of black and white (Monson).

Robin Hood clearly belongs to a white “discursive universe” – English folk culture and mass culture, and the idea of the European middle ages. Is there a “signal difference” that marks a different, black discursive universe? Yes, of course: the use of black pronunciation and slang in “Robbin’ Hood”.

What does this do? Well, Gates also called Signifyin(g) “ironic reversal with signal difference.” Reversal means that the appropriated material – Robin Hood – is given an ironically reversed meaning. The reversal here is the switch from “Robin Hood – stealing from the rich” to “robbin’ hood[s] – stealing from the poor”, referring to economic exploitation and systematic deprivation in urban ghettos.

Now we have two disparate meanings, one marked as white by its cultural background and one as black by slang and pronunciation, and with opposed meanings. Now things get interesting…

Gates’ classic book on Signifyin(g) as a literary technique investigates the Signifyin(g) Monkey tales – a genre of black folk verse about a trickster monkey who gets into and out of trouble because of his Signifyin(g) talk. Gates discusses how Signifyin(g) involves “a measure of undecidability within the discourse, such that it must be interpreted or decoded by careful attention to its play of differences.”

The Gang Starr title is a neat example, I think, because we can see some of this play of differences. When lyricist Guru juxtaposes a bandit hero against the exploitation of ghettos, we can infer that he is making a case for “Robin Hood”-type action against rich exploiters. But because of the ambiguity and indirectness, we as listeners have to participate in constructing this meaning. (Very much comparable to how people participate in a groove by playing, vocalising, or dancing along.) We’re challenged from a number of angles by Guru’s title: it asks, do we feel similar to, sympathetic to or distanced from people who speak in slang and inhabit “hoods”? if sympathetic, how do we feel about them taking outlaw action? do we think Robin Hood and black ghetto-dwellers have a similar justification for breaking the law? if not, is it because of their different races, or because heroism is a fiction? do we enjoy the appropriation of a white culture hero to make this point?

Through challenge and an ambiguity that allows space for multiple meanings, “the hearer is thus constrained to attend to all potential meaning carrying symbolic systems in speech events–the total universe of discourse.” (Mitchell-Kernan)

That’s me done for today. You should definitely check out Ingrid Monson’s and Henry Louis Gates Jr.’s books if you find this interesting. They have many more examples and quotes.

I hope to be back soon enough with another post. If it’s not some bass playing thing, maybe it will be something about the very use of the phrase “black music” (which obviously has a lot of currency on this blog), because the Jazz Studies Reading Group that I help run is reading two chapters about how music relates to identity and race. Due to the fact that, so far, I write all these blog posts based off readings and recordings rather than face-to-face interactions or interviews with black people, I think it wouldn’t be too hard to find problems with my cavalier use of the term. Anyway, we’ll also likely be reading Monson’s book in the coming months. If you’d like to come to our meetings in Dublin, email us at the address in the image.

Thanks for reading. Feedback is always much appreciated! 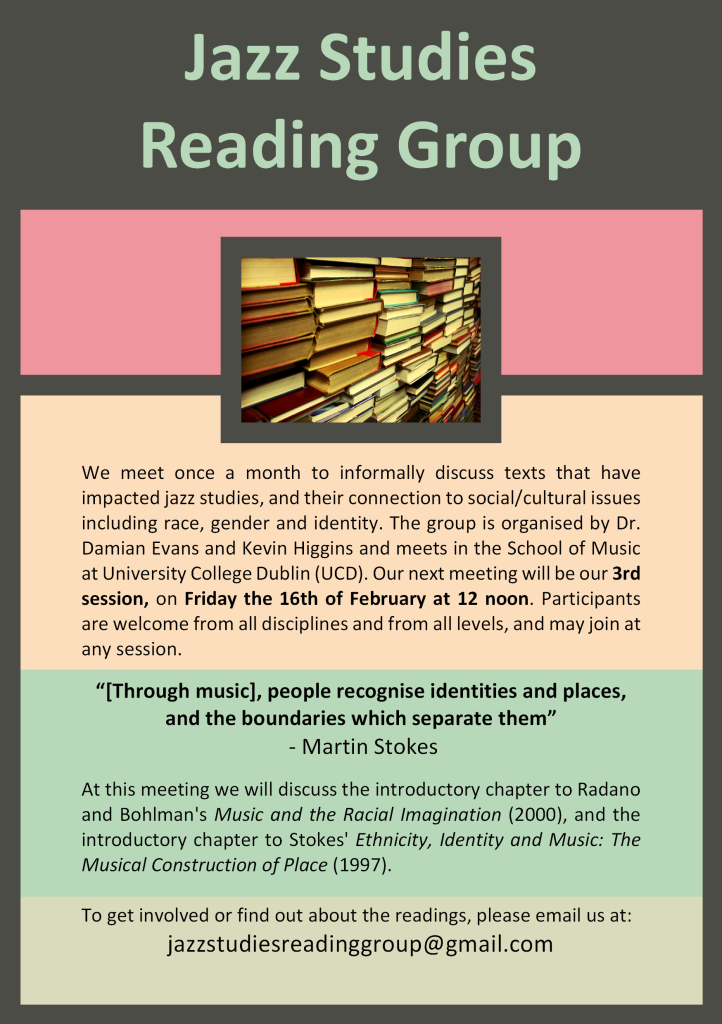 Today’s post is not research but opinion. I’ll keep it short, as I’d like it to be a starting point for discussion. You are invited to comment!

I’m going to argue that chord-scale theory, the conceptual framework used in jazz college courses world-wide, is flawed even as a teaching tool. I swallowed it whole in jazz school, and frankly I think I wasted years trying to make music according to it.

The basic idea, of matching scales to chord symbols, is useful and I’m glad I learned it early. But it can’t be your only guide. I’m with the widespread view that learning bebop is key to navigating changes. Chord-scale theory is bad at explaining what bebop and bebop-influenced players did. (Music made by people who learned chord-scale theory at jazz school, unsurprisingly, fits it better. In fairness, the theory has enabled some great music and great advances in playing.)

Is chord-scale theory a useful simplification for teaching? I believe it loses too much in return for too little understanding.

(By the way, I’m going on my memories of ensembles and courses, and books such as Mark Levine’s The Jazz Theory Book. I may not be completely fair to them. But I’m talking about the overall results of this teaching system.)

The first thing chord-scale theory misses out on is the idea of key. Jazz until the 60s (and most of it after that) was in major or minor keys (with a lot of room to manoeuvre of course). Playing in key, whether diatonically or bluesily, is a basic element of jazz improv and melody. Yet this can’t really be expressed in terms of chord-scale theory. Sure, basic chord progressions like I IV or II V I, when explained with the theory, do yield the 7 notes of a major key. But that’s an unproductive way of restating that chords can belong to a major key.

It’s not that chord-scale advocates were against the traditional view of keys and chords. Rather, they took it as given, and tried to progress from it. Unfortunately, their supplementary ideas are taught as a complete system to beginners or rock-oriented musicians who don’t understand functional harmony.

So, in the theory, chords are reduced to signposting 7-note scales/modes – supposedly a pool of equally “valid” tones. This misses out on a lot. All the inner organisation of chords is de-emphasised. That’s a massive melodic resource thrown away. The crucial functionality of dominant chords via voice-leading resolution of their tritones becomes a vague notion of “avoid notes”. The whole lovely world of functional chord relationships within a key, as well as its developments via blues and alternate paths, is defused and obscured.

To be precise for a moment… it’s valid to try make a new system to deal with e.g. extended, suspended and altered chords. But chord-scale theory fails to look in detail at directionality, acoustic effects, or any other audible aspect of those chords.

For another example, the all-important fact that melodies inescapably suggest chord progressions (which needn’t be the accompanying chord progression), is barely glimpsed in Mark Levine’s famous textbook. I went back and checked just there.

… By the way, check out this funny quote: “Why does the blues scale – with so many “wrong” notes – sound so right when played over a blues? Your guess is as good as mine.” Cheers Mark, I’m only after spending 30 quid on your book.

Sadly, this lack of specific talk on harmony means that African-American contributions may not get their due. Let me explain that. Going beyond chord-scale theory means recognising the importance of European classical concepts in jazz: tonality, chord- and non-chord tones, etc. But, observing those also forces you to observe when they don’t apply, which is often – so then you have to face African-associated forces like timbralism, pentatonicism, parallelism and alternate paths. Chord-scale theory completely flattens all this cultural/historical stuff out.

More abstractly, it doesn’t invite investigation into the underlying structures of music such as symmetry, the harmonic series and maximally even sets.

If I had to find something genuinely progressive in the theory, it’s the possibility of getting away from relating tones down to the root of a chord, and instead imagining a harmonic space to be freely divided. I like that.

Am I asking too much from a learning aid for students? Well, I think a lot of people, like I did, come to music courses without very clear ideas, searching for meaning which they sense is somewhere in the music. It’s insulting to put anything but the best ideas before anyone sincerely looking for knowledge.

I’m starting to get rather idealistic. Okay, I think chord-scale theory is popular because it is a shortcut allowing students to quickly start playing and interacting rhythmically while avoiding wrong notes, which is cool. The problem is they will probably play bad melodies.

What are your thoughts?